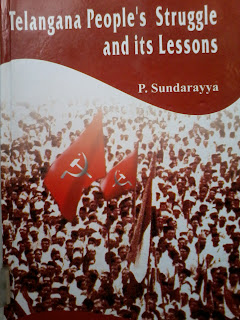 Bottom line: If you are interested in the Telangana struggle and doing any research on the issue, then this book is a must-read.

Telangana's struggle, which arose in 1946, forms the base of communist existence in India. It was this movement that sprout the seed of communist ideology in India which later got more strength from the Naxalite movement and finally brings to us the communist party of India (Maoists) in 2004. However there is no point in comparing the Telangana struggle and the Naxalite movement, as the former ends up the miseries of the poor people and brings joy to the deprived section of people who were suppressed and exploited horribly (as explained in the book) during Nizam's rule by the landlords, Deshmukh, Deshpande and many other (details in the books) while the later initially aiming for the welfare of poor landless tribes and Dalits, today has been announced as the most dangerous threat to the internal security of India by Shri Manmohan Singh.

This book is a detailed account of the complete Telangana struggle written by Putchalapalli Sundarayya who himself was a renowned national liberation fighter, and was one of the founders of the Communist movement in India and he was one of the leaders of the Telangana struggle. Beginning with an account of the feudal oppression in Nizam's rule and the organization of masses against the backdrop of the national movement, Sundarayya recounts the shaping of an alternate nationalism that gave particular emphasis to the struggles of the depressed classes. It was this decided focus that spurred the uprising. He is able to provide a detailed description of the intricacies both of decision-making and execution of plans by the various guerrilla squads. The book provides a ringside view of the movement of the squads, the network of communication, and the police tortures as if the camera were following the course of events. The book provides a wealth of details and any account of the Telangana struggle is incomplete without reference to this authoritative work.
Armed conflicts Book Reviews Challenges of India Social India