Theories Behind The Origin Of Himalayas 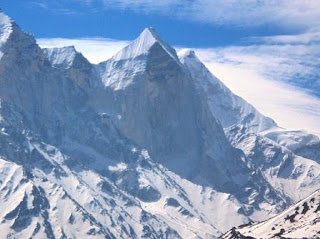 The Himalayas are the vast, most extensive, loftiest, and the youngest mountain range of the world, located on the northeastern border of India. They are one of the biggest assets of the Indian subcontinent. No other mountain range anywhere in the world has so much importance as the Himalayas has for India (Significance of the Himalayas). The Himalayas are the body and soul of India. They have affected the life of Indian people for many years. The great wisdom of Veda and Yoga evolved in the abode of The Great Himalayas. The Himalayas have attained a unique personality owing to their high altitude, steep gradient, snow-capped summits, deeply dissected topography, youthful drainage, complex geological structure, and rich temperate flora in the subtropical latitudes. Northern India gets much of its rain from Monsoon and the Himalayas act like a big barrier for the Monsoon clouds. I believe that it is impossible to explore all aspects of this vast ocean of mountains.

The magnitude of their size can be estimated from the fact, that the central axial range of the Himalayas alone stretches for a distance of 2,400 km (over 22° longitude) from the Indus gorge in the west to the Brahmaputra gorge in the east.

The width of the Himalayas varies from 500 km in Kashmir to 200 km in Arunachal Pradesh. The total area of the Himalayan mountain range is nearly five lakh sq km and it extends eastward in the form of an arcuate curve that is convex to the south. The Himalayan mountain chains have the loftiest peaks in the world. The highest is Mount Everest which is 8,848 mt above sea level. Other than this the number of peaks higher than 8,000 meters is 14 and those over 7,500 mt. are 20. The number of peaks over 7000 mt. runs into hundreds.

There are many hypotheses regarding the origin of the Himalayas, however, there is almost complete unanimity that the Himalayan mountains have come out of a great geosyncline called the Tethys Sea. About 120 million years ago, there were only two big continents in the world- in the north was Laurasia or Angaraland and in the southern hemisphere was Gondwanaland. In between Laurasia and Gondwanaland, there was a long, narrow, and shallow sea called the Tethys Sea. Sediments were brought by the rivers from these landmasses and deposited in the bed of the sea. These sediments were subjected to a powerful compression force from both continents, this compression squeezed and crushed the sediments of Tethys, and a series of folds were formed one behind the other giving rise to the highest relief features on the earth - the Himalayas. The curved shape of the Himalayas convex to the south is attributed to the maximum push offered at two ends of the Indian peninsula during its northward drift. In the northwest, it was done by the Aravalis, and in the northeast by the Assam Ranges. Recent studies show that India is moving northward at the rate of about 5 cm per year and crashing into rest of the Asia, buckling the Himalayas between Angaraland and Gondwanaland. This drift is providing instability to the Himalayan region.

The Himalayas is formed in different phases, hence it does not comprises a single range but a series of at least three ranges running more or less parallel to one another. Therefore, the Himalayas are supposed to have emerged out of the Himalayan Geosyncline i.e. the Tethys sea in three different phases one after the other. The first phase commenced about 120 million years ago when the Great Himalayas were formed. The second phase took place about 20 to 30 million years ago when the Middle Himalayas were formed. The Shiwaliks are formed in the last phase of Himalayan orogeny- say about two million to twenty million years ago.

The diastrophic movements which helped in the formation of the Himalayas started in the late Cretaceous period and continued through the Eocene, Middle Miocene, Pliocene to the lower Pliocene and finally into the upper Pleistocene to recent times. There are numerous pieces of evidence to show that the Himalayas are still rising and the process of uplift is not completed. The heights of various places as determined by the trigonometrical methods indicate that the Himalayas continue to rise till date. Estimates made by Godwin Austen show that the average elevation of the Himalayas was 2,400 mt above sea level about a million years ago which has now risen to 3,050 mt. The Mahabharat range is still in a state of rigorous uplift. The present rate of uplift of the Himalayas has been calculated at 5 to 10 cm per year.
Following are some of the evidence which proves that the Himalayas are still rising:-

In the next post, we will discuss the various divisions of Himalayas.
Himalayas physiography of India