In the heart of every social or political  movement is the desire to bring some change in the pre-existing structure or ideology of society, and that is what bodoland movement aims to achieve. This movement strive to dismantle the existing geopolitical setting in Assam, and want a separate state out of it, for the Bodo tribe of this area. Is it right or wrong, that is not the purpose of this article but to understand the need for this demand and to see how Bodoland movement evolves over a period of time.
Negligence by Governments

The foundation for this movement was already laid in the British era when Britishers allowed the immigration of landless peasants from the densely populated bordering districts of Bengal (Now Bangladesh) to the sparsely populated districts of the Brahmaputra valley of Assam which was dominated by Bodo people. This process of migration was continued even after independence, and in fact it blew out of proportion. The massive increase of migrant population put tremendous pressure on tribal land, this forced tribal people to evict their land. In the post colonial period, tribal were forced to depend on the upper caste landlords ruling class. The tribal were also deprived of the benefit of industrialization and they remained at the level of peasant economy. The imposition of Assamese language as the official language of the state also fueled the resentment among Bodo people. All in all, the negligence shown by the Government towards the welfare and protection of identity and culture of  tribal people, sowed the seed of Bodoland movement.

Origin of the demand for separate state (PTCA)

The Tribal people of Assam had realized that they are being alienated on both economic and political platform, and their culture, heritage and identity is facing threat under the umbrella of Assamese nationalism. The formation of All Assam Plains Tribal League (AAPTL) in 1933 and Bodo Sahitya Sabha in 1952 shows  Bodos quest for forming a socio-political identity. Platform for the Bodoland movement was made with the formation of  political organisations like Plain Tribal Council of Assam (PTCA) and All Bodo Students' Union (ABSU) in 1967. PTCA  raised the demand for the political autonomy of Bodos and this demand found expression with the idea of a separate union territory, namely, Udayanchal comprising all the tribal areas of the North bank of the river Brahmaputra. Formation of PTCA was a important step in the evolution of Bodoland Movement, but PTCA gradually lost its relevance among common Bodos "because of their internecine conflict and their brief electoral alliances with the then Assam Government as PTCA had joined the short lived Janata Dal ministry led by Golap Borbora in 1978-79 and eventually moderated its demands to make the new administrative unit an autonomous region within Assam"*.

ABSU was formed in the same year as PTCA, but it always played secondary role to PTCA, but soon they realised that PTCA had failed to fulfill the aspirations of the Bodo people. With the election of Upendranath Brahma as its president in 1987, ABSU became the sole flag bearer of Bodoland movement. Brahma decided to launch a democratic mass revolution on the principles of Gandhian non-violence aimed at formation of a separate state (Bodoland) by 1990 through a fifty-fifty division of Assam. ABSU submitted a memorandum to the Central Government on 22nd January 1987 demanding a separate state. They started mobilizing people against Assamese chauvinism and blamed Assamese people for the alienation of the tribal of Assam. An umbrella organization named Bodo People's Action Committee (BPAC) was formed to unite all sections of Bodo people irrespective of age and political affiliation. The ABSU and BPAC jointly organized a huge rally on 12th June 1987 at Judge's field in Guwahati (Assam) where they coined the slogan “Divide Assam Fifty-Fifty”. Soon they realized that their peaceful protests were not helping the cause and they revert to violent activities. Police were used to suppress the movement but it too failed in its effort.

After many rounds of talk between Government and ABSU and other parties of interest, the Memorandum of Settlement (MOS) popularly known as Bodoland Accord was signed on 20th February, 1993 Kokrajhar. The accord provided for a democratically elected Bodoland Autonomous Council (BAC) in the Northern Valley of the Brahmaputra river, it was not a separate state as envisioned by Bodos, but a administrative unit within Assam. The BAC Bill was introduced in the Assam State Assembly on 5 April 1993 and the Bill was enacted as Bodoland Autonomous Council Act, 1993.

Formation of BAC provided some sort of autonomy to the Bodos within the state of Assam and it certainly   slacked some tension, but it failed to fulfill the expectation of all section of Bodo people. In the backdrop of this discontent, two major militant organization came into existence, National Democratic Front of Bodoland (NDFB) demanding separate country and  Bodo Liberation Tiger Force (BLTF) demanding separate state, and these organisation rejected the accord. Now these organisation was spearheading the Bodo cause, but with their violent method. They started ethnic cleansing operation resulted in large scale riots and killings of Santhals, Nepalese, Bengali and Muslim immigrants. This onslaught resulted in  mushrooming of small militant organistaion of different communities like Adivasi Cobra Force (ACF), Birsa Commando Force (BCF), Bengali Tiger Force (BTF), Islamic Revolutionary Army (IRA), Immigrant Muslim Liberation Army (IMLA) and many others in late 90s. 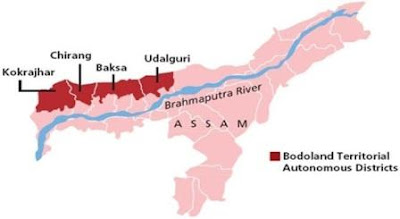 In the mean time ABSU and BPAC also rejected Bodoland Accord in 1999 due to the various unresolved issues between government and BAC, like demarcation of the boundaries of the BAC, and they again launched a fresh movement this time demanding a complete autonomous separate state 'Bodoland'. However, they again end up with what they already had. On February 10, 2003 with the help of initiatives of ABSU a memorandum of settlement was signed between Government of India, Assam Government and BLT. The main objectives of the agreement were to create an autonomous self-governing body to be known as Bodoland Territorial Council (BTC) within the state of Assam and to administer a territory spanning 3082 villages making four districts – Kokrajhar, Chirang, Baksa and Udalguri under the provisions of the Sixth Schedule of the constitution of India, to abolish the Bodoland accord of 1993, to fulfill economic, educational and linguistic aspirations and the preservation of land rights, socio-cultural and ethnic identity of the Bodos; and to speed up the infrastructural development in the newly formed BTC area. Formation of BTC is the culmination of Bodoland movement till now.

Bodoland movement is the story of people's quest for self-determination, when people realizes that their culture, identity and anything they identify with is being threatened and overshadowed, there is a natural urge among the people to defend what is theirs, that is what happened with Bodo people. Since the colonial rule, there was a feeling of alienation among Bodos, but when this feeling remained same even after independence because of the ignorance of Government, people started organizing themselves in pursuit of political autonomy, which resulted in the formation of organisation like ABSU, PTCA, BLTF and many others. This struggle for self determination ended up with formation of Bodoland Territorial Council (for now). However, Eleven state has gained statehood  since 1967, when ABSU was formed, three from that same region (Manipur, Meghalaya, Mizoram), this raises intriguing questions.

Bibliography:
*Bodoland Movement: A Study by Topu Choudhury
Quest for Peace in Assam A Study of the Bodoland Movement by Jaikhlong Basumatary
Backstory Indian Politics political problems tribes of India