Pros and cons of Indian Railway 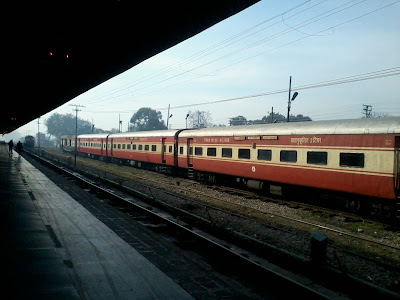 The first railway line in India was opened for public use on 16 April 1853 between Mumbai and Thane over a distance of 34 km. Further extended to Kalyan on 1 May 1854 and to Khopoli on 12 May 1856. Today Indian railway system is the main artery of the country's inland transport. Railways form the lifeline of the country, its contribution to economic growth and integration of the nation is so much that it could be called the backbone of the surface transportation system in India.
Running 55,000 coaches of 10,000 trains daily, all over the country, the Indian railway provides the cheapest and most convenient mode of passenger transport both for long-distance and suburban traffic. The phenomenal growth of Indian railways has taken place in the post-independence era. At present, India has the second-largest railway network in Asia and the fourth-largest in the world after the USA, Russia, and China. But India tops the worlds leading countries with regard to passenger/ km carried. December 2012 transported over 25 million passengers daily (over 9 billion on annual basis). In 2011, the Indian railway carried over 8,900 million passengers, annually more than 24 million passengers daily.

It is the largest public sector undertaking of the country comprising a vast network of 7,500 stations spread over a route length of 65,000 km with a fleet of 9,231 locomotives, 59,713 passengers coaches, and 2,29,381 wagons as of 31 march 2012. About 22,224 km or 34% of the route km was electrified as of 31 march 2012. A huge army of over 1.4 million employees is ceaselessly active in running and maintaining the railways, making it the largest employer of manpower in India. Indian railways are always functioning, be it day or night, winter or summer, peace or war, flood or famine, fair weather or foul. According to D R Khullar 'to think of India without the railways conjures the bleak vision of a nation that is stagnant and immobile.

Statistics describe all the glory and progress of the Indian railway, both quantitatively and qualitatively, during the last few years, but this system is still plagued by a number of problems that require immediate attention. A lot has been done, but a lot more is yet to be done. Some of the major problems include:

Safety Indian railways have been in the news albeit for the wrong reasons. Compared to other countries, the frequency of train accidents in our country is much, this is because of outdated technology and the poor condition of the tracks. Nearly 25 percent of the total railway tracks in India are overaged and are due for replacement.

Manual Scavenging  Railway tracks of India are everyday receiving human excreta from 1,72,000 open toilets. After the orders of the supreme court in 2005, to prepare a time-bound scheme for the total eradication of manual scavenging. In this green initiative, were proposed the introduction of bio-toilets (by 2019 all coaches will be installed with bio-toilets) to replace the existing direct discharge toilets.
Challenges of India Indian railways Social India