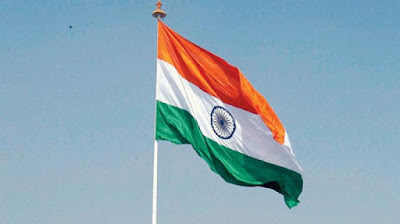 In these times when the debate about paying respect to the symbols of nation is getting dense day by day, whether it is related to standing up for national anthem or paying respect to the symbols of this nation, it is very important for us to realize, in what circumstances these symbols were created and why they were created after all. Today we are free nation but we should never forget that the freedom we are enjoying today did not come easy to us. People laid down there life to uphold very symbols we are debating about, and still they are. People scarified their lives in numbers, so that we could have the freedom and now we are using that freedom only to demolish symbols they created, how pitiful it is.
This question came to my mind, why should we respect a piece of cloth, what is it all about. So I looked into the constitution and debates of constitutional assembly so as to know why is it necessary and I stumbled upon the speech of Pt. Nehru, where he moved the resolution for the adoption of national flag. Every one who is involved in this debate about symbolism in a nation must read this speech of him, I am quoting some parts here, you can read complete debate here.

Stating about the significance of the flag, he describes how this flag inspired many to die for the nation-
"I remember the ups and downs of the great struggle for freedom of this great nation. I remember and many in this House will remember how we looked up to this Flag not only with pride and enthusiasm but with a tingling in our veins; also how; when we were sometimes down and out, then again the sight of this Flag gave us courage to go on. Then, many who are not present here today, many of our comrades who have passed, held on to this Flag, some amongst them even unto death and handed it over as they sank, to others to hold it aloft. So, in this simple form of words, there is much more than will be clear on the surface. There is the struggle of the people for freedom with all its ups and downs and trials and disasters and there is, finally today as I move this Resolution, a certain triumph about it--a measure of triumph in the conclusion of that struggle."

Further Pt. Nehru defines the meaning of freedom in a different way, he says that-
"There will be no full freedom in this country or in the world as long as a single human being is unfree. There will be no complete freedom as long as there is starvation, hunger, lack of clothing, lack of necessaries of life and lack of opportunity of growth for every single human being, man, woman, and child in the country."

So as long as we are not completely free we need our symbols, which will expand our identity beyond our own desires and inspire us to work for the nation, where people are still hungry and living a sub-standard life. Further stating the relevance of the flag for the nation Pt. Nehru says that-

"I do think that it is a very beautiful Flag to Look at purely from the point of view of artistry, and it has come to symbolize many other beautiful things, things of the spirit, things of the mind, that give value to the individual's life and to the nation's life, for a nation does not live merely by material things, although they are highly important. It is important that we should have the good things of the world, the material possessions of the world, that our people should have the necessities of life. That is of the utmost importance. Nevertheless, a nation, and especially a nation like India with an immemorial past, lives by other things also, the things of the spirit. If India had not been associated with these ideals and things of the spirit during these thousands of years, what would India have been? It has gone through a very great deal of misery and degradation in the past, but somehow even in the depths of degradation, the head of India has been held high, the thought of India has been high, and the ideals of India have been high."
Indian Symbols