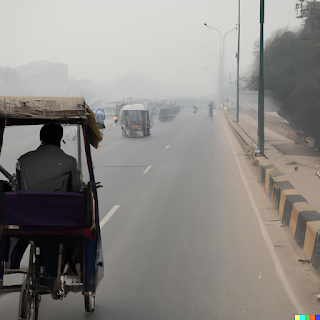 Come winter, the mainstream media is packed with the news of pathetic air quality and the disastrous impact of thick air pollution covering all of the capital city of India. The drastic drop in air quality, in the aftermath of stubble burning in adjacent areas of Delhi and the Diwali celebration, comes with the hue and cry in various sections of social strata, demanding immediate action from the governments, and yet for many economically weaker sections, it is overshadowed by their daily fight for survival. This immediacy of action often takes a political hue instead of countering the issue head-on with appropriate policy changes. And this is the story that gets repeated every year, with nothing substantial done about the issue other than the seasonal steps, mostly on paper, achieving very little in terms of countering air pollution on the ground.

How grave is the issue! well, this article is not about the graveness of the issue but to just paint a rough picture in 2020 Delhi pollution claimed 54000 lives and a loss of nearly Rs 58000 crore, that too when economic activity was slow because of covid. Many studies have established beyond doubt the detrimental cost of air pollution on health and the economy.

However, on the response front, other than doing the paperwork, it has been rather a series of short-term seasonal reactions from the government like the odd-even rule for cars, bans on construction activity, etc. that too in the wake of public uproar, most of which comprises curative steps rather than preventive steps. Preventive steps if any are the ones forced by the judiciary in response to civil society's plea, be it the formation of EPCA (which was recently replaced by another entity CAQM) or the GRAP. Governments on their part seem to be dragging their feet all through this episode as if it doesn't matter, but does it?

What matters in a democratic setup is a vote. Air pollution is a huge concern of our time, it is a complete violation of the basic element of life and the constitution too (article 21- right to life). But who is concerned? the people who are aware of it and the aware ones do not form the substantial vote bank. Going through the history of air pollution in Delhi one will see that the governments are not so keen on tackling this menace, they are content with lip service and forming different committees and action plans, but the need for urgency is missing in the action. welfare in democracy is a balancing act for the parties, the pie of welfare has to be cut in proportion to the political gains they will bring in terms of votes. Even if you are genuinely interested in welfare you still need votes to achieve that.

It is the will of the majority which gets priority, and if only a few people and media raise the air pollution issue that too only during winter when you can literally see the pollution, even though air quality throughout the year is pretty bad, then the government's steps will also be visible only during winter, like pollution.