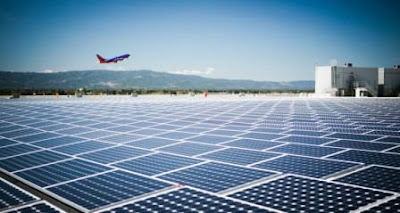 As the time is progressing mankind is  looking to switch from conventional and limited source of energy to the sustainable energy source and we all know that solar energy is the future. When everyone is looking towards Solar power, Cochin International airport took a futuristic step and become the first airport in the world that completely operates on solar power.

It has made a 12 MWp solar power plant, comprising of 46,150 solar panels laid across 45 acres near cargo complex. This power plant is producing 50,000 to 60,000 units of electricity per day to be consumed for all its operational functions, which  technically make the airport ‘ absolutely power neutral. A total of 400 polycrystalline modules of 250Wp with five numbers of 20kW capacity 'Refu-sol make string inverters' were used in this plant. It is a grid connected system without any battery storage.

You would be wondering what will happen in the cloudy days and special at night time, well in that case CIAL(Cochin International airport limited) has worked out a solution with Keral state electricity board, wherein, CIAL gives as much power it produces (in day time) to the grid of KSEB and ' buy ' back the power from them when needed (especially in night).

This plant will produce 18 million units of power from ' sun ' annually-the power equivalent to feed 10,000 homes for one year. Over the next 25 years, this green power project will avoid carbon dioxide emissions from coal fired power plants by more than 3 lakh metric tons, which is equivalent to planting 3 million trees or not driving 750 miles.
Incredible India