Ankhon dekhi: When a man refuses to believe everything other than what he actually sees. ( Spoilers) 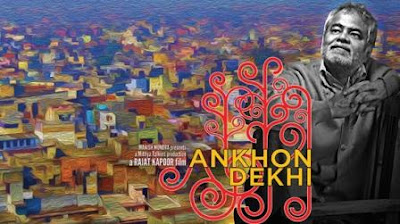 Sometime I wonder how this world would be if there was no hope or belief. What will happen if people won't believe anything else other than what they experience themselves, it is quite crazy even to think about it, because almost all our deeds  are supported by the faith or belief we have in society and various other social institution. Without this belief, our life would rather crumble, and that's what happens with the Bauji in this movie.

The protagonist of this movie is Raje Bauji, common man in his late fifties, who lives with his joint family in a small house in old Delhi. Everything in his life was going fine, when some series of events changed his life forever. Bauji's Daughter was in love with a boy, who was considered characterless by the people, but when bauji actually confront the boy, he seems very nice to bauji. This brings a kind of clarity to bauji, and he decides that he will believe only, what he sees and experiences. This very simple  decision changes his life completely. As he has never seen a god he refuses to worship them. He left his job as a travel agent because he refuses to book tickets to Amsterdam as he has not seen the places himself. In one of the funny scene of movie, to confirms that lion actually roars, he spent whole day in zoo to see if lion really roars.

Over a period of time he started  building up followers, his daughter get married to the boy he loved and he solved all the issues he had with his younger brother. Now he is free from all the responsibility there is no confusion and everything in his life is settled. He takes his wife to vacation and while talking to her he casually mention that now as he is done with all his responsibility he is feeling like flying.  On this his wife jokes that he doesn't know how flying feels as he has never experienced that. This got him thinking and what he does next you will see.You must watch this movie.

This movie is written and directed by Rajat Kapoor,  and produced by Manish Mundra. The film stars Sanjay Mishra and Rajat Kapoor in lead roles.
Must watch