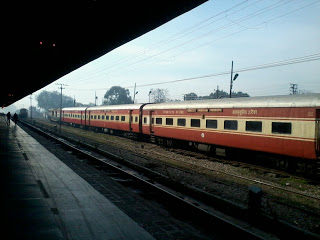 Most common sight in the Indian railway stations is the railway tracks littered with the excreta  and all kind of dirt. It is because of the flush toilets, currently used in most of the train, which dumps the human waste directly on the track without any treatment, which create unhygienic conditions in the stations, which can lead to various kind of diseases, and corrode the tracks.

According to an estimate, India Railways generates 6000 tonnes of solid waste from trains and passengers at railway stations every day, out of which about 4000 tonnes of human waste is dumped directly onto rail tracks. With so much of train traveling population, it was a serious issue of concern for Indian Railways.

Indian Railways with the help of  DRDO developed a bio-toilet. This is somewhat similar to the Bio-digester already in use for the Indian troops serving in Siachen Glacier or other high altitude region where normal process of degradation is not possible due to very low temperature. The bio-toilets  contain a colony of anaerobic bacteria, kept in a container under the lavatories that converts human waste into water and small amount of gas. The gas are released into the atmosphere and the water is discharged after chlorination on to the track.

There are many advantages of using bio-toilets. The anaerobic bacteria used in the green toilets can easily survive in extreme climate condition and normal disinfectant used by railway for cleansing don't kill this bacteria. Currently  there are 35,000 bio-toilets installed in 10,000 railway coaches. Under its Swachh Rail-Swachh Bharat programme, Indian railways aim to install 1,40,000 bio-toilets in all 55,000 coaches by 2019 and make entire rail network as zero discharge zone. This is a perfect combination of 'Make in India' and 'Swachh Bharat'.
Challenges of India Indian railways