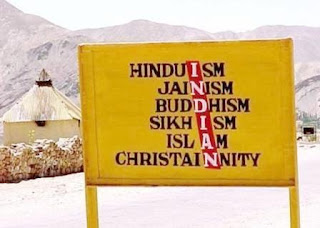 Bharat, often called India and Officially Republic of India, is a country of great geographical and cultural extent. Geographically it extend from snowy ranges of Himalaya in the north to the shores of Indian Ocean in the south, covering an area of 32,87,263 sqkm (7th largest in world) and comprising in it nearly every land forms whether it is Gangatic Plain, peninsular plateaus, Thar desert, the great Himalayan Mountains, island or coastal areas. Along with diversities in its features, it has an equally diverse climate, as in the words of  Banford "we may speak of climates but not climate of India ", India possess all types of climate found in the world. Indian landmass gets abundance of sunshine from the tropical sun and splashing rains from the monsoon. These two are most important climatic factors governing Indian climate and in some way its economy.

It has a diverse population of 1.25 billion people of  different ethics, religion. India a potpourri of different cultures, religion and beliefs, and home of not just one or two languages but an uncountable numbers of different lingual families, its constitution has recognized 22 languages as official languages of India, but that's official, according to one estimate, 1,652 “mother-tongues" are spoken in India. Considering its physical and cultural diversities India is sort of "epitome of the world."

It must not be forgotten that the above mentioned diversity of India is based on it underlying unity. India has been able to project itself as a single territorial unit in the face of political, physical, social and economic contrast. Our saints have spread the message of universal brotherhood, which has helped a great deal in uniting different society in India and making the country a united nation.. Although Hinduism is the way of life for majority of Indians, Hinduism and Islam are amalgamated to give its culture a unique blend. It is in this composite matrix that integration of India is strongly rooted. In its early time India was called the Golden Bird, such was the pride and prosperity of Indian land, and now also it is blessed with variety of natural resources in huge quantity, India is a land of future as well as land of potentialities, the need is for us to wake up and work for the betterment of its social, economical and political structure.

Whole world look at India for their spiritual enlightenment, due to its deep spiritual roots.  India has golden history of more than 5000 years. She is an emerging  global power, with its one of the fastest growing economy in the world. India has recorded a growth rate of over 200 times in per capita income in a period from 1947 to 2011. India thus commands an important strategic position on the globe with respect to trade as well as social and cultural interaction. India is an experiment through ages. India is unique, no parallel example exist-one of the oldest and still youngest, it is India- Incredible India